Avola Decision is a decision model-based decisioning platform migrating from supporting the proprietary TDM (The Decision Model) approach to support for the DMN (Decision Model and Notation) open standard. I reviewed the previous product and since then the team has been working on a new product. The new Avola Decision is .Net based on the backend and is available on-premise or on Azure for the SaaS version (public or private clouds). The UI has been rewritten and is completely HTML and browser-based.

Customers begin at a landing page – a dashboard where shortcuts and information that are used regularly such as notifications or tasks can be displayed. Customers can have many projects within their environment and projects can be created by non-technical users. Projects are within a domain (and a domain may have many projects) and individual projects can be linked to dependent domains to bring in shared content if the owner of that content allows it. Multiple Decision Services can be defined for the project and different members can be added with different roles. A separate identity server supports two-factor identification and allows custom security approaches for specific customers.

Domains contain business concepts (sets of data elements) and projects. Users work within a project and its related domain(s). They have instant free-text search across the project that shows hits for the search as it is typed. Explicit tags are coming soon, allowing objects to be tagged and managed using these tags.

Data elements can be defined based on a set of allowed types. Specific data types can be constrained to a specific set of values (value lists) or precision. These can be used as a glossary for multiple data elements with a where-used capability to see which data elements are using the definition and which decisions use that data. Documents such as policies can be uploaded to create Knowledge Sources and additional ones can be created that point to websites etc. 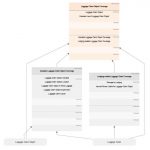 The decisions in a model can be viewed, either just those exposed as decision services or all decisions. As before, the diagram is generated from the logic being defined behind the decisions. Plans exist to allow editing of the diagram directly but for now it is based on the executable logic behind it. The diagram is DMN-like, using input data nodes as well as the boxed list of attributes (combining both styles of data presentation). In addition, the decision nodes are divided up to see conditions, operands, and metadata from both data and sub-decisions. Users can zoom in and out, restrict the number of levels being viewed, see the layer “above” a decision – the decisions that require it etc. Future versions will allow the user to hide the data elements, knowledge sources etc.

Behind each decision is decision logic, currently only as a decision table. Other DMN representations will be coming soon as will multiple action columns but they plan to continue to use the TDM layout for decision tables as well as some of the decision table features in TDM but not yet defined in DMN. The decision table editor has been upgraded to support row and column movement, in-line editing and change highlighting. Rules can be cloned and edited and some checking is built in such as type conformance, range overlap/underlap. A formula builder is used for calculations and users can click through to follow inputs to their sources. Importing and exporting FEEL that defines decision logic is a future possibility also but they don’t plan to expose it as a standard way to edit logic in the tool.

Testing can be done at any point. Test data collections can be defined and used to test the development or any deployed version. One or many test collections can be run and the status of each collection and test is shown, making a quick visual check for success easy. An Excel template can be downloaded to bulk create test cases or they can be entered/edited individually. Tests can be viewed in terms of the rows that executed in the various decision tables and the table can be opened for editing. Impact analysis – seeing the impact of a proposed change in terms of overall results – is also planned.

Once logic is tested and confirmed, there is an approval cycle and deployment support as you would expect. Once this process starts, the whole service is packaged up and encapsulated so it cannot be impacted by changes e.g. to a shared value list.

Executions store the version of the model used, the outcome of the decision invoked as well as the results of each sub-decision as well as the data used to create it. This information is available for reporting and analysis.

Future add-ons will allow the data defined to be used to define web forms or surveys to capture the data needed.