TRIAD 8.5 has just been released and is the latest version of FICO’s combined account manager and customer manager platform for financial services companies (its focus is on accounts/customers where credit risk is a critical issue). I got an update recently focused on Decision Graph. Decision Graph is  one of the new capabilities. Decision Graph  is a new strategy management and visualization tool – replacing or enhancing a decision-tree centric approach. 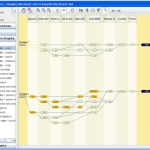 Because strategies in Decision Graph can be represented as graphs, they allow the reuse of elements – sub trees – preventing the growth of strategies into large, unwieldy decision tree structures. The technology has 7 patents pending and was described by one of the inventors of CART (Professor Jerome H. Friedman) as the best strategy visualization tool he has ever seen. I blogged about the technology while it was an R&D capability and it has now been released commercially. The new capability has a number of key features:

The reduction in complexity is the most critical outcome of this collection of features. They improve the ability of the software to spot errors automatically and any of the visualizations can be used to build and edit a strategy (all share an underlying model). Levels can also be reordered automatically to simplify the strategy (improving execution and understandability), without changing the underlying logic of the strategy.

Many financial services companies have found that their strategies have become so unwieldy that editing them is too hard. Using this new feature to reorder and revisualize strategies can result in dramatic reductions in complexity of up to 80% (though 25% is more typical – still very useful). The key advantages for customers are that it allows for more rapid change (improving agility), increased likelihood of finding improvements, lower errors due to reduced complexity and easier explanations/execution. FICO estimates this could be worth $1M per year on a 2M account portfolio.

You can see a FICO Tech Talk on TRIAD 8.5 and Decision Graph on YouTube.